The Vikings believed in many different gods and goddesses. Despite their divinity, the gods were similar to humans, with good and bad traits. The primary gods were Odin, Thor and Freyr. Odin, the god of war and wisdom, had great magical powers. Thor was more down-to-earth. He was very strong, but not especially clever. Freyr, the god of fertility, was generous.

During the early Viking Age, there were no temples; people prayed to the gods in nature: by waterfalls, at wells or in “holy groves”. However, the German chronicler Adam of Bremen saw a large temple with statues of Odin, Thor and Freyr while visiting Uppsala in the year 1075.

Our knowledge of ancient Nordic beliefs stems mainly from two Icelandic collections of poems. “The Elder Edda” was written during the Viking Age, by authors unknown. It tells the story of the creation of the world, its development, and how it will end. It also contains tales of the gods and their adventures. “The Younger Edda” was written in the thirteenth century by an Icelander called Snorri Sturluson. It is actually a textbook on poetry, but some of its motifs originate in pagan mythology.

Asgard, the home of the gods

In the mythology of the Vikings, the world was a giant ash tree called Yggdrasil. This tree was home to all living creatures. At the top of the tree lay Asgard, where the gods (also called “aesir”) lived. Some of them were Tyr, Frigg, Freya, Balder, Heimdal, Brage and Idun. Both gods and humans would face their end when Ragnarök, the end of the world, occurred.

Foremost among the gods was Odin, the god of wisdom. He owned Valhalla, the largest building in the world. There, he collected all men who died in battle. He had an eight-legged horse called Sleipnir. Two ravens, Hugin and Munin, flew around the world tree and told Odin of everything they saw.

Thor was one of Odin’s sons. He was the largest and strongest god, protecting the humans against the giants who threatened everywhere outside their settlements. For this, he used his war hammer Mjölnir and his belt of strength, Megingjord. He traveled in a chariot pulled by two goats.

The opposite of Thor was Freyr, the god of fertility. He was a peaceful farmer. His mount was the gold-coloured boar Gyllenborste. Sometimes Freyr went on long journeys in Yggdrasil, traveling on Skidbladnir, a ship which was capable of moving on land as well as on water.

Midgard, the home of the humans

On a branch of the world tree lay Midgard, the home of the humans (including the Vikings themselves). The rough bark gave rise to mountains and valleys, the dew was seas and lakes, and the moss formed vast forests.

Below Midgard lay the underworld including Niflheim, the realm of the dead. Niflheim was ruled by the goddess Hel. On the outermost part of the branches, goblins and dwarves lived.

The giants were the worst enemies of the gods. They lived in Utgard, at the edge of the world, in a place called Jotunhem. There are many stories of the battles between gods and giants.

A giant called Loki was allowed to live in Asgard. He was clever but treacherous, both helping the gods and causing them trouble. Loki had three children: the Midgard Serpent, a sea monster, Fenris, a large, monstrous wolf, and Hel, the goddess of death.

The ash tree had three roots, each gathering nutrients from a well. The dragon Nidhögg gnawed on one of the roots. By another one lived a kind old giant called Mimer. He knew everything that had happened and everything that would happen. By the third one lived the norns. They were goddesses of fate and determined the life and death of all living creatures.

The gods could grant humans success in different endeavours. The common way of asking the gods for help was to offer them a sacrifice (called “blot”).

Worship could happen on a small scale at home, or at a common place in a settlement where people gathered to worship. Possibly some kind of temple was constructed. Often people gathered at certain places in nature to worship: a grove, a hill or a well.

Three times a year, in autumn, in the middle of January, and during early summer, large sacrificial feasts were organized to honour the gods.

These feasts were conducted in various ways. For example, people read holy spells and told tales of the gods. The most important part, however, was the sacrifice of  animals. The blood was splashed on wooden sculptures of the gods, while the meat was eaten. On rare occasions, humans were sacrificed as well.

Different gods had different specialities. If you were in trouble, it was important to pray to the right god for help.

Odin was the god of war, so before battle the Vikings prayed that he would help make them victorious. Odin was the favourite of kings and prominent people.

Thor was most popular among the common people. He was in charge of thunder and storms. When the thunder rolled, it was because Thor was riding his chariot, and when he hit with his hammer, lightning flashed. Thor was useful as help against evil, including both supernatural beings and malicious chieftains.

Freyr decided over rain and sunshine. He helped peasants with their farming and made crops grow. Together with his sister Freya, the goddess of love, he controlled the fertility of animals as well as humans.

It is not known how strongly the Vikings believed in their gods. Maybe some were more believing than others, like in modern times. However, they were certainly very superstitious. Nature was full of beings who influenced your existence, and it was important to be careful when it came to trolls, dwarves and gnomes. If you upset them, the consequences could be disastrous. 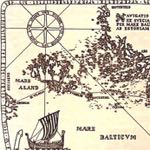